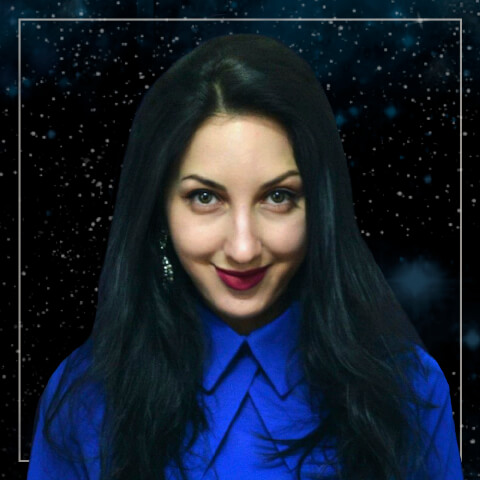 Today we sit down with Dark Angel artist Inna Vjuzhanina, to discuss her artistic direction for the project, her love of Tomb Raider, and how she goes about producing art from inspiration to final brush stroke.

Originally, I was brought onto the project just to do the album cover art, but the atmosphere of the team was so open to creative freedom and independent suggestions that I ended up doing a bunch of other things, including concept sketches for the artefact posters – which are gonna be brought to life if we get the funding! *wink-nudge* – other promotional pieces for the campaign, and doing product photography for the pendants, too (which gave me loads of joy!)

Tomb Raider has been such a crucial part of my life ever since I first met Lara, so drawing inspiration for anything TR-related has NEVER been an issue. I have more problems with having too many ideas and too little time to bring them to life, so there’s still tons of stuff sitting on the shelves of the secret chambers in my imagination. Sometimes I dream of finding that Fountain of Youth so just I could bring all those ideas to life. Lara, gimme a hand with that fountain situation, will ya?

When it comes to imagination though, the classic Tomb Raider franchise has always been a bottomless well of inspiration for me. I LOVE those old-school graphics and how masterfully the developers used all the tricks in their toolboxes to compensate for the limitations of the day. Music, sounds, level design, puzzles, traps, location varieties – all play together in the most beautiful of symphonies. And then of course there’s the player on the other side of the monitor who gets to let their imagination fill in the gaps and paint the most beautiful pictures in their mind. Modern graphics have gone a long way in achieving absolutely incredible results in terms of realism. But it’s boring. Every single inch of every single location is rendered pixel-perfect and cluttered with detail. Your own imagination goes into deep slumber; it’s got no part to play… and I love giving my imagination full creative freedom. I love imagining how those pixelated locations would look in real life; I love creating my versions of them, painting them, coming up with all the possible details and variations. In a way, every old game was YOUR own game because no one saw all those blurry graphics the same way you did. I think it’s precious.

The way it always makes my imagination thrive. In a lot of ways, it crosses paths with my artistic side – I love exploring concepts and solving artistic challenges, I love being free in my creative expression and feeling excited about new ideas, I love packing up my “backpack” to go on new artistic adventures. And that’s exactly what TR is: freedom, excitement, wildest flights of imagination and unforgettable adventures. All these aspects mirror each other in the most amusing ways.

That’s one of the things that really impressed me about the TDAS team: freedom. I was given complete creative freedom and I was trusted to express my vision. There were no limits, boundaries or industry-requirement lists. That’s when your best work is born! If my memory serves me right, that’s the atmosphere Core Design had – freely sharing ideas, everyone having their own voice and input. Working on this project has been one of the best experiences I’ve had to date. People running on pure passion, love and dedication. You can’t fake those things; you just feel the genuine love.

I’m a huge fan of the classic Tomb Raider franchise. Lara is the one who inspired me to tap into my creative vein and has been by my side as I took my first awkward steps as a hobbyist (my first year of studying art consisted of TR-only illustrations!) Soon, I realised art was my true passion and what I wanted to pursue as a career, so I focused on studying it seriously. Years later, and doing this as my job, it’s only logical to assume that contributing as an artist to the franchise that started it all for me would be my ultimate art dream. There was one “but”, however; Core Design was long gone, and the chapter of the classic games was officially closed. I’d pretty much accepted the fact that I would never be able to contribute to something classic on the “official” level – until Ash came along and brought me onto this project. I’ve been pretty much like a kid on Christmas morning throughout the whole process. Seriously, pinch me!

There weren’t just a few – there were a LOT of concepts in the early stages! I think I turned in about ten designs for the team to pick the final one, but these concepts were already the “weeded out” selection. There were literally dozens of designs in my secret art vault. When the dream project of your life comes along, you can’t possibly do anything to put bonds on your imagination. Production goes crazy.

When I need to come up with the concept for a project, the thing I love doing is just “downloading” the basic requirements into my head and going for a long walk. I let my imagination do its thing and just quietly observe all the leads and threads that appear. I know that it’s at this stage that the most generic stuff is born. Your brain comes up with the most obvious solutions first, so then you just need to patiently dig through these layers of mud and rubble before you tap into the gold vein underneath. I just sketch everything I come up with in a super-rough manner (pretty much no one but me can understand what it is about!) After that, I start fleshing out the concepts I feel have the strongest potential. Some turn out to be not as good as I initially thought, so they quickly get put in the dumpster. The others get to move to the next round where I really need to narrow down the selection to the best ones that I will render more tightly and send to the team for review. 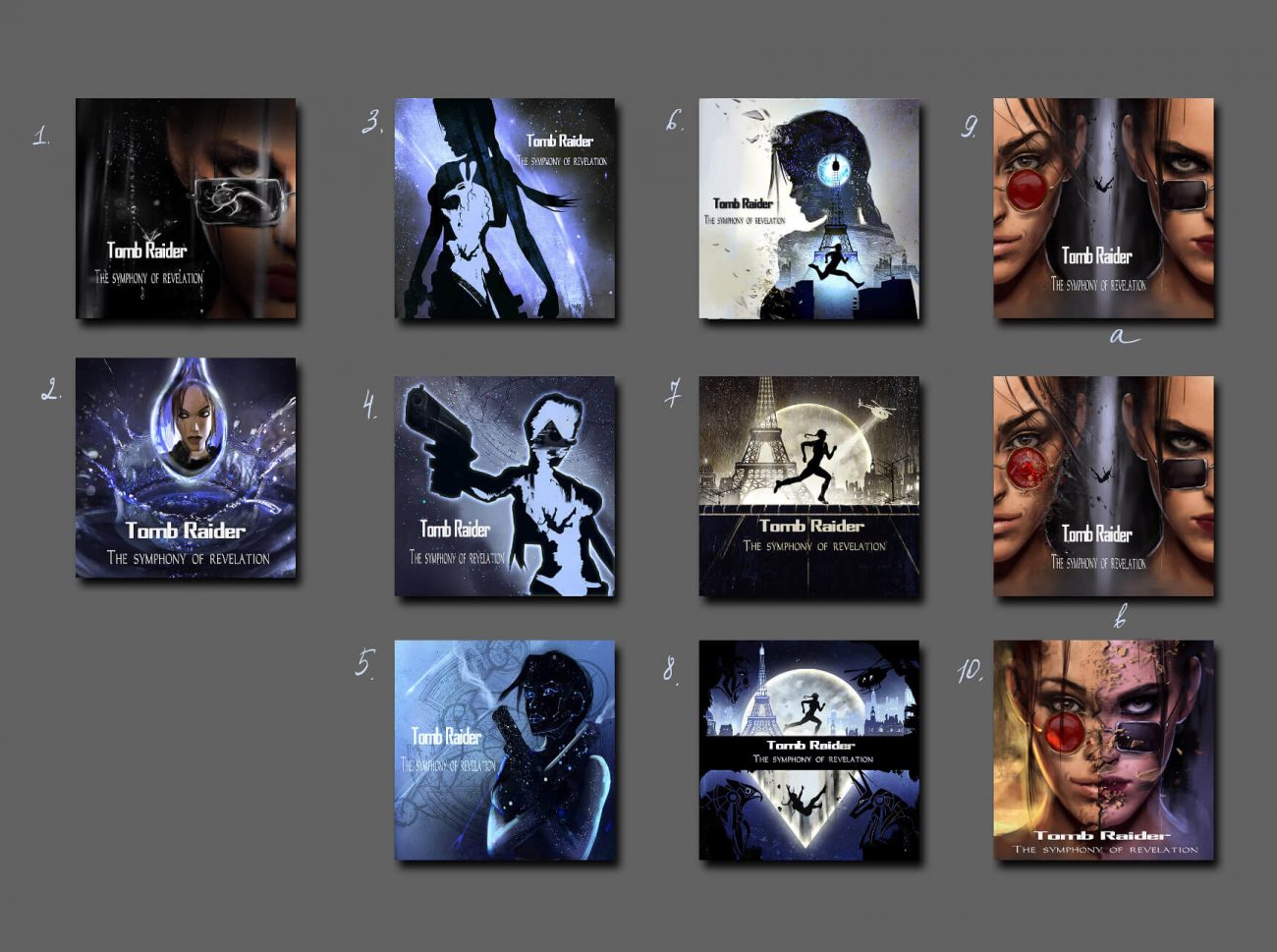 This may seem too long of a process (why don’t we just jump to the fun painting stage right away?!), but this preparation stage is crucial; I give it as much time as I possibly can. It’s always exciting to jump into rendering and all the beautiful stuff, but if your foundation’s weak then you can throw all the cherries you want on top – the cake will just crumble. And we like our cakes to be pretty!

When it comes to the actual research/inspirations, I didn’t need to do any for the actual TR-part; everything I possibly needed to know was already in my head. But I wanted to get some fresh ideas for the design of the cover. I mainly work in an illustrative style and that’s not necessarily the best decision for the album cover. I wanted to explore more conceptual options and see what other paths there were for us to choose. I looked through a bunch of different album covers, movie posters and through my own collection of references to pour in some new ingredients into my brewing stew of creative juices.

I was really pleased with the original concepts I created that explored the themes of rainy Parisian streets, being a fugitive on the run, the turn of the millennium, etc. They were visually interesting, fit the TR4–6 themes and told a bit of a story. But I still felt I hadn’t quite hit the spot. I started thinking more and more about the overall motif that was tying the three games together: Lara’s fall at Giza was really the event that became the turning point, slicing the two worlds apart. I had the TR soundtrack playing in the background throughout the whole process, subconsciously programming the right feel in my mind. Peter’s music is very deep, emotional, and multi-layered. It shows the complexity of Lara’s character (she’s not just a pretty face after all!), and I really wanted the artwork to reflect that. When I listen to Peter’s scores I feel sadness, nostalgia, adventure, passion, daring, pain, hope, tenderness… There’s a fascinating spectrum of emotions all at once! For those who don’t know Lara up close and personal, she might seem only a badass chick with guns. Those who DO know and feel her, however, know that she’s a brilliantly complex character with all those feelings and emotions combined.

I was about to turn in my initial seven concepts, even though I had a tiny nagging feeling at the back of my mind that there was more to it. But I took my sweet time with the exploration stage, until, though there was no tight deadline pressure, it really was time to proceed. Ironically enough, that same day I caught a glimpse of a film poster. I think it was a BBC documentary about saving a disappearing species of elephant. It had the most striking artwork which really caught my eye – a simple image with a close-up on the head of an elephant that was slowly dispersing, disappearing into the background. Such a simple concept with such powerful message! It really hit the spot. I still remember how, later that day, I was in my pyjamas ready to go to bed when suddenly I had the idea flash in my head, literally making me freeze in my tracks. I knew that was the one!

Storytelling is one of my favourite aspects of art. I always drop some hints, symbols or story bits into personal work and this new idea was exactly what I’d been looking for. I wanted to depict the two sides of Lara as we knew her – daring, fun, adventurous “before Egypt” Lara, and cold, reserved, detached “after Egypt” Lara. The old Lara dispersed into her darker version, with the fall down the pyramid as the trigger. There are also little Easter eggs within the reflections in her glasses, if you’re observant enough! 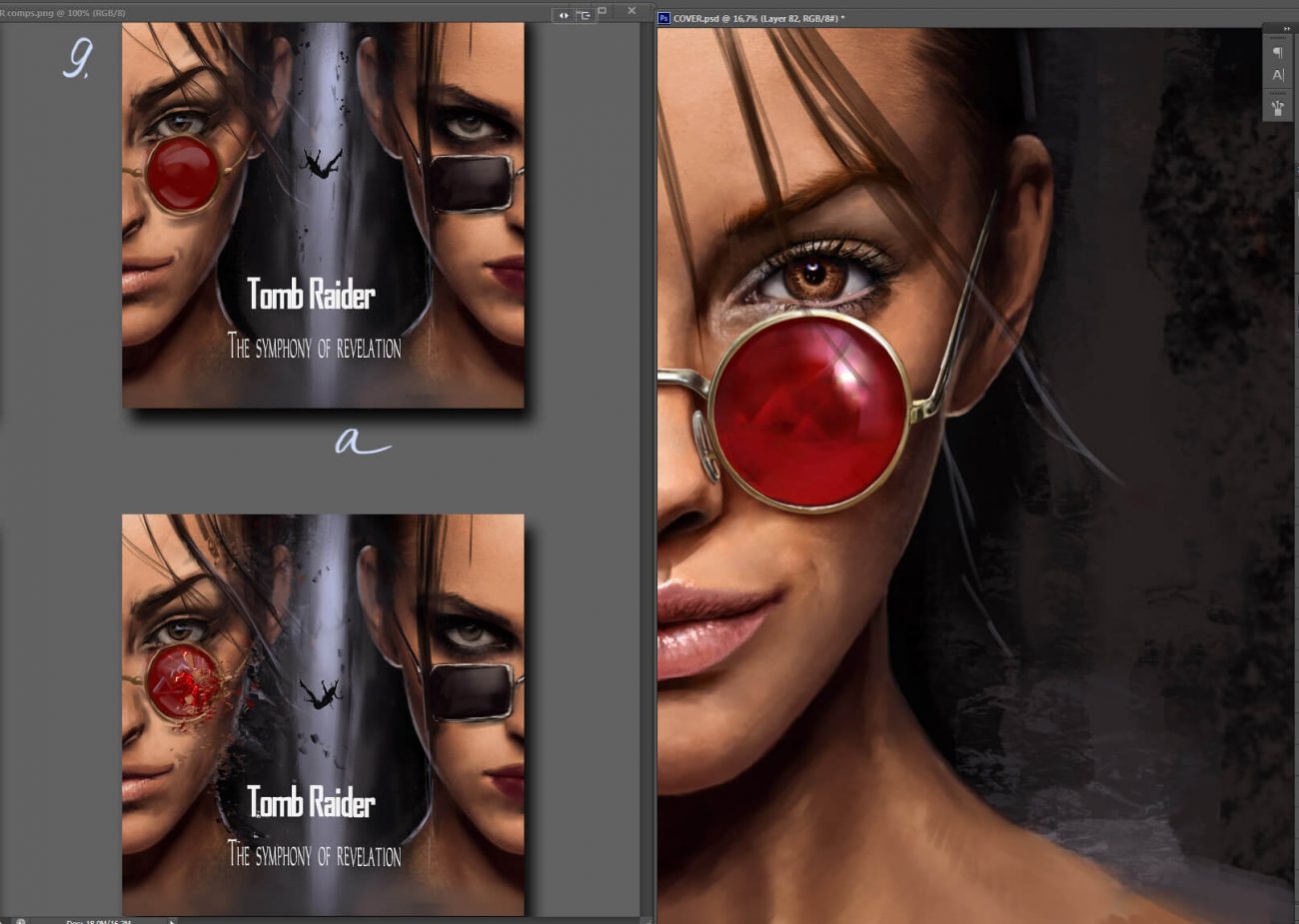 Needless to say, I felt like I’d been working on the most important project I’ve ever done to date. I HAD to do it justice – both as a tribute to my own warmest nostalgic memories, and as a tribute to all the generations of the loyal classic fans that grew up with this franchise. When you’re working on something like this it really transcends art, music or the game itself. People grew up with this. Lots of their memories and emotional experiences are tied to the classic games. For some fans, it’s some of their happiest memories of playing with their dad or brother; for others, it’s the time when Lara’s strength gave them courage to pull through the darkest moments of their life; some people met their best friends or spouses; some found escape from all the chaos of their lives in the wilderness and isolation of the games. It’s a priceless legacy. So… no pressure creating a tribute to it, right??

It’s hard to put numbers to it, really, but the ACTUAL painting process must have been around 20–25 hours. People often put emphasis on the actual process of laying down brushstrokes on the canvas, thinking that’s when the magic happens but, in reality, that’s the closing part of the adventure. If you haven’t done all the research and preparation work (which takes probably two or three times as long), you’re gonna be really lost when the final stage comes. I really love doing that with personal work; it’s fun just to let it go and see where it takes you. But when so much is at stake and people need results you absolutely can’t do that! 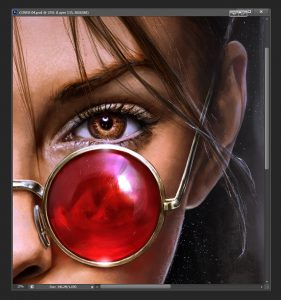 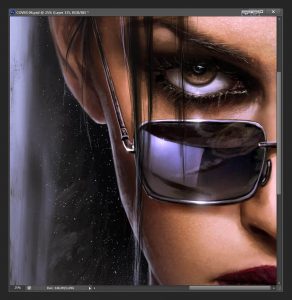